Iowans could take a lesson from leaders in Oregon, who had the courage to look at their residents’ economic challenges. Just repealing local minimums does not meet that test of leadership.

Those concerned about a “patchwork” or “hodgepodge” of minimum wage laws across Iowa might want to take a look west — far west — to Oregon. 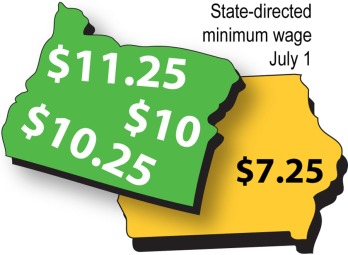 In contrast to Iowa legislators’ calls for “uniformity” no matter how inadequate a uniform minimum wage may be, the Beaver State has embraced the idea of different minimum wages.

Quite a contrast from Iowa, where we still sit at $7.25 as a statewide minimum, with five counties (Lee County the latest, on Tuesday) choosing to set a higher minimum for their workers. State officials who have balked at raising Iowa’s statewide minimum have retaliated with legislation to repeal the raises and prohibit future such actions, the bill as of Wednesday morning still awaiting the Governor’s almost certain signature.

Oregon’s hybrid approach of a state policy setting a small range of local minimums may or may not be optimal, but it does recognize the value of a meaningful state minimum reaching to all corners of the state, and the fact that not all labor markets are the same — they differ by locality.

In Iowa, the local option exercised thus far by five counties under their home-rule authority is a middle ground that permits careful judgment when state edicts prevent it.

But Iowans could take a lesson from leaders in Oregon, who had the courage to look at the economic challenges faced by their residents, and to address those challenges in meaningful public policy. Just repealing local minimums does not meet that test of leadership.

Iowa could learn something from Oregon voters about taking a balanced approach to budget challenges.

In a victory for fiscal prudence, Oregon voters recently passed two initiatives — Measures 66 and 67 — that upheld their legislature’s decision to use a balanced approach to their budget shortfall.

In Oregon’s case, lawmakers last session made cuts to the budget and raised income tax for the top 3 percent of filers. They also raised the corporate minimum tax from $10 and increased the corporate income tax rate for businesses netting over $10 million a year, and temporarily for most other businesses. As the Legislature already voted last session to use a balanced approach that included trimming the budget and raising revenue, this vote saves Oregonians from further cuts in important services. This is notable for two reasons:

■     Oregon is known for its opposition to raising taxes, having last voted to raise taxes about 80 years ago when it added a state income tax.
•     It is one of five states that does not have a state sales tax.*
•     It also has a statewide cap on property tax.
•     It has a “kicker” law that automatically sends money back to residents when revenues exceed forecasts. Oregon has no rainy day fund.
■    Given the opportunity for a direct vote, Oregon voters chose to retain a balanced approach and raise taxes on themselves rather than make additional cuts that would decrease funding for education, health care and other essential services.

Oregon’s voters truly understand the importance of a balance during difficult economic times.

So, what does this mean for Iowa? For one, the Oregon vote remarkably reflects the results of a survey of Iowa voters last fall.

That survey for the Iowa Fiscal Partnership found that Iowa voters favor a balanced approach to addressing further budget problems:

■     Six in 10 favor some increase in taxes and fees rather than making cuts alone.
■     By the same ratio, Iowa voters believe the wealthiest Iowans — those earning over $250,000 per year — and big corporations pay less than they should in taxes.

The situation is complicated, and Iowa voters recognize that using budget cuts or tax increases alone will not solve our balance problem.

Oregon’s unemployment rate is 11 percent, compared to Iowa’s 6.6 percent. Oregonians understand that a budget has two sides, and a balanced approach to spending and revenue assures a responsible way to protect critical services in difficult economic times.

* Federation of Tax Administrators website, http://www.taxadmin.org/fta/rate/sales.html (accessed on January 29, 2010). The other states are Alaska, Delaware, Montana and New Hampshire.