Whatever can be said about the expensive new sales-tax break for business, creating jobs in manufacturing is not one of them.

Pushes for lower taxes on business routinely come with promises for more jobs. On that score, the more-costly-than-expected manufacturing sales-tax break has not produced for Iowans.

Since the start of the current fiscal year, when the new law took effect, Iowa manufacturing jobs are even lower than where they started. Clearly the new break did not cause the drop — a decline in manufacturing jobs started over two years ago after some recovery from the 2007-09 Great Recession. Iowa lost more than 30,000 manufacturing jobs from the peak in those years and never fully recovered. Manufacturing jobs dipped below 211,000 in April for the third time in six months, to nearly their lowest level in five years. 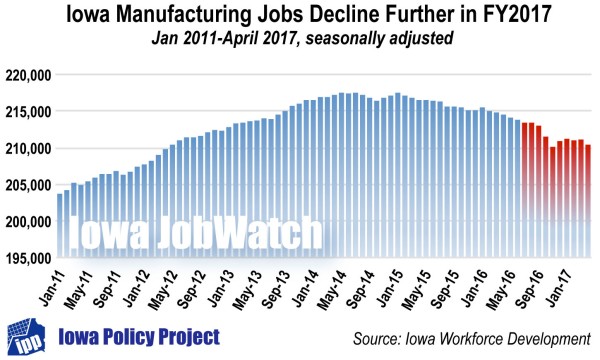 Thus, whatever can be said about the expensive new sales-tax break for business, creating jobs in manufacturing is not one of them.

It does appear the break is more costly than had been expected. An April memo from the Legislative Services Agency (LSA) has received significant attention in recent days, as sales-tax revenues are on pace to be down about $100 million from what was expected for the fiscal year ending June 30. The cost of the sales-tax break for an expanded list of items used in manufacturing had been projected at $21.3 million for the state.

The LSA analysis suggests that at least part of the unexpected revenue loss might be due to underestimated costs of that special sales-tax break.

It is true that the manufacturing sales-tax break was promoted on larger grounds than just job growth. In a break from its usual promotion of a hodgepodge of inequitable breaks creating a severely unbalanced playing field, the business lobby had promoted this as a fairness issue for businesses. That political strategy worked.

But increasing jobs was the steady drumbeat from Governor Branstad for his economic policies throughout the six years of his return to office in 2011, so it is reasonable to look for any job impacts.

In this case, none are immediately apparent. What we can see is that without the change, and with more careful budget projections, new Governor Kim Reynolds quite likely would not be facing the added revenue challenges she has before her.

Manufacturing jobs have particular significance because they pay better than jobs in other sectors to equivalent groups of workers.

In September, prompted by President Clinton’s discussion of the overall U.S. “jobs score” under Republican and Democratic presidents since 1961, Stephen Herzenberg of the Keystone Research Center and I analyzed trends since 1949 in manufacturing employment by presidential administration.[1]

Manufacturing jobs have particular significance because they pay better (even today) than jobs in other sectors to equivalent groups of workers, and because they leverage more related employment (up and down the supply chain) and more export growth than any other sector. In addition, manufacturing workers and many manufacturing-intensive regions (e.g., in Pennsylvania, Michigan, Ohio, Wisconsin) have political significance: Their swings back and forth between the two parties often decide the outcome of presidential elections.

Since the release of our national manufacturing jobs score analysis, we learned that the Bureau of Labor Statistics maintains data that make it possible to examine trends in manufacturing employment by state since 1939.[2] We have produced a briefing paper on these issues, beginning with an exploration of manufacturing employment trends since 1948 nationally, in four multistate regions, and in individual states.

In the subsequent section of the paper, we detail the findings for a single state, Pennsylvania, but we also provide charts online for all states, inviting similar analysis of states besides Pennsylvania.) The last part of the paper considers what our numbers mean, drawing on our published work on the national manufacturing jobs trends.

The Keystone Report details our findings — and their implications — for Pennsylvania. But we also provide an interactive map and chart that allow investigation of the numbers for any state or region. The chart below examines Iowa manufacturing job trends from 1948 to present. 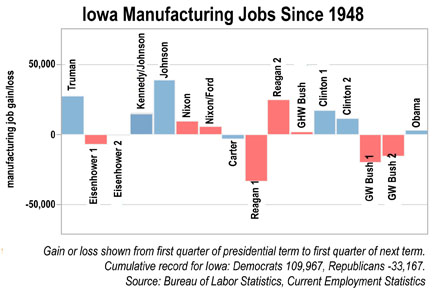