The drop in the unemployment rate is due less to economic recovery than by discouraged workers dropping out of the labor force entirely.

Iowa’s unemployment rate fell to 6.6 percent in July, down from its peak of 11 percent in April. But larger picture offers little grounds for optimism.

The overall jobs deficit is still substantial. The Iowa economy has shed 97,200 jobs since February — that’s 35,500 more jobs than were lost in the entirety of the Great Recession. And that 6.6 percent unemployment rate is still equal to the highest monthly rate recorded during the Great Recession.

The drop in the unemployment rate is generated less by any observable economic recovery than by the fact that discouraged workers are dropping out of the labor force entirely. Since February, Iowa’s labor force participation rate (the share of the adult population who are working or looking for work) has plunged from 70.9 percent to 65.6 percent — a decline twice as steep as that of the nation as a whole, and steeper than all but one other state (Kentucky). 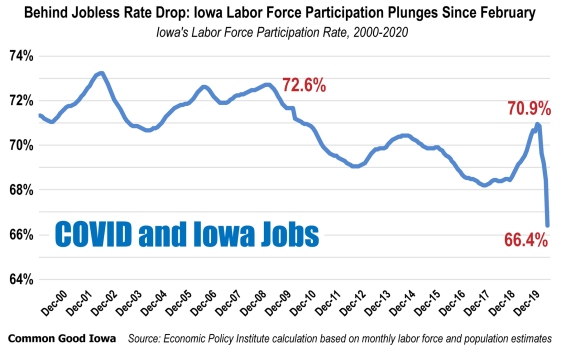 For those on unemployment (106,392 continuing claims, and 6,544 new claims last week), the uncertainty and insecurity is mounting. It is now almost a month since the $600 “PUC” bump to unemployment benefits expired, and it is unclear when or how the $300/month “Lost Wages Assistance” program established by executive order while kick in as a partial replacement.

Because the Lost Wages Assistance program requires a 25 percent match in state money, it will be unavailable to those who are receiving “Pandemic Unemployment Assistance” (PUA) benefits instead of regular state benefits. Meanwhile, Iowa Workforce Development is aggressively trying to move beneficiaries from the regular state program over to PUA. And, as of September 8, the job search requirements for almost all receiving UI benefits will be reinstated.

It’s hard to spin any of this as good news. While just under 100,000 Iowans have gone back to work, almost 130,000 have dropped out the labor force entirely. For many, the return to work — into the teeth of a pandemic that shows no sign of abating — is driven less by a genuine economic recovery than by an unemployment insurance system whose benefits are that is suddenly less accessible and less generous. 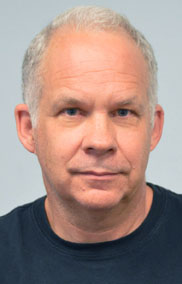 Colin Gordon is a senior research consultant for Common Good Iowa. He is a professor of history at the University of Iowa.