As Iowa’s unemployment rate climbs towards numbers not seen since the Great Depression of the 1930s, we are shedding health coverage — in the midst of a sustained public health crisis — almost as fast as we are shedding jobs. 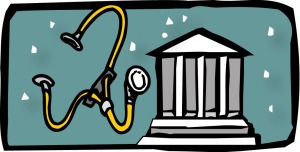 One of the cruelest ironies of the COVID-19 unemployment crisis is that, alongside the job losses, many workers and their families are also losing health coverage.

In Iowa, almost two-thirds (64 percent) of the nonelderly population rely on employment-based health insurance. As Iowa’s unemployment rate climbs towards numbers not seen since the Great Depression of the 1930s, we are shedding health coverage — in the midst of a sustained public health crisis — almost as fast as we are shedding jobs.

Even in good times, our crazy patchwork of health coverage — job-based care for most, Medicare for the elderly, Medicaid for low-income families, the ACA “marketplace” for others, and no coverage at all for the rest — is an engine of inequality. The better the job, as a rule, the better the health coverage. And in bad times, that coverage can easily disappear. Our reliance on job-based coverage, as one health policy expert famously put it, is like an umbrella that melts in the rain.

By one estimate (through May 14), about half of the 300,000 Iowans who lost their jobs in the COVID-19 recession also lost their health insurance. And this is a conservative estimate, as it does not count family members who might have relied on the same coverage and it is based only on those who lost their jobs and filed an unemployment claim.

These workers have some options — although the interruption of coverage alone is a frightening prospect in these troubled times. A lucky few might be able to pick up coverage through another family member who remains employed (and insured). Those losing job-based coverage have the “COBRA” option of continuing coverage by paying the full premiums themselves. But this is a costly option (the annual premium for job-based family coverage in Iowa is over $18,000) that few can afford.

Those whose family incomes fall above the Medicaid or CHIP thresholds have the last option of the Affordable Care Act “marketplace” insurance. Iowa’s health insurance exchange is a “federally facilitated” marketplace, which means it cannot allow open enrollment outside the conventional enrollment window in November.

But loss of a job (and job-based insurance) does qualify for off-cycle enrollment, and the premium assistance available for those purchasing at least a bronze plan on the exchange can substantially reduce costs for those with income under three to four times the poverty level. But here again there is a catch: Unemployment benefits count as income in determining both eligibility for ACA assistance and the amount of the assistance.

All this underscores the inequity and inefficiency of our job-based health care system. It is uneven and unreliable. And it fails at its most elemental goal: to protect working Iowans from risks that are beyond their control.

Colin Gordon is senior research consultant for the nonpartisan Iowa Policy Project (IPP) and a professor of history at the University of Iowa. He has led IPP’s State of Working Iowa analyses since 2001, and is author of Dead on Arrival: The Politics of Health Care in Twentieth Century America, and Citizen Brown: Race, Democracy, and Inequality in the St. Louis Suburbs.

At this critical juncture, Iowa can take the high road to shared prosperity, or go down a dead end.

Iowa can unlock the potential of each individual and allow all workers to share in the fruits of their labor by making public investments in the foundations of a strong economy. Well-resourced schools, access to higher education, decent wages and protections, economic supports, clean water and renewable energy, and a cleaned-up tax system, all can pave the way to opportunities and broadly shared prosperity that Iowans want.

Unfortunately, policy choices have put us on a road that prioritizes corporate profits over worker wages and corporate tax cuts over the public investments that allow for a strong, sustainable economy. We are at a crossroads and our policy choices today and in the near future can either pave the path to economic opportunity in every corner of our state, or create roadblocks to prosperity for everyday Iowans.

Our people-first roadmap offers the way forward. It lays out the evidence-based, responsible solutions to our state’s most pressing issues, pinpointing several stops along the way that would mark progress for our state, such as:

Creating the workforce of our future and ensuring our children reach their potential. Iowa can and should ensure K-12 schools receive the funding they need for every child to succeed, no matter where they live. We also must restore our commitment to higher education with more state support, lower tuition, and aid to reduce student debt.

Boosting economic security and supports for working Iowans. Giving Iowans’ lowest wage workers a long overdue raise, ensuring workers get paid what they’re legally owed, shoring up our system of compensation for workers who get hurt on the job, and restoring worker rights to collective bargaining can ensure that all Iowa workers are getting a fair deal. Iowans also need a boost in child care assistance, which can make or break the ability of a family to work.

Restoring a public commitment to the health and well-being of every Iowan, particularly seniors and people living with disabilities. Reversing the privatization of Medicaid and pursuing cost savings through innovation and efficiency rather than reduced services and worker wages are critical steps to ensuring access to health care for all Iowans — now and in the future.

Ensuring clean water and renewable energy for a healthy, sustainable Iowa. We can and must balance the state’s need for clean and abundant water with our agricultural economy by reducing water pollution. Likewise, Iowa should restore its legacy of leadership in renewable and efficient energy in order to create a cleaner, greener state for future generations.

Cleaning up and restoring balance to the tax code. Right now, Iowa asks the lowest income Iowans to pay a higher share of their income in state and local taxes than those with the highest incomes. We can fix this by cleaning up corporate tax loopholes that squander precious public dollars that could otherwise be invested in shared opportunity for Iowans.

Iowa is at a critical juncture. We can take the high road that leads to progress and shared prosperity, or go down a dead end. The policies in this roadmap provide a clear route to a stronger Iowa. For more detail on each stop on the roadmap, please click here.