The labor force grew by 2,900 workers last month. This could be a sign of increased confidence in the market, as more Iowans decide looking for work is a worthwhile endeavor.

Alas, the forecast is still a bit mixed: Iowa is certainly making headway in nonfarm jobs numbers, but we continue to see high unemployment rates.

The good news is pretty good. The number of nonfarm jobs in Iowa increased by 7,300 to 1,474,200 in March. This increase is heartening, though we do have a ways to go. Iowa is still down 16,200 jobs compared to last March.

As is usually the case, Iowans are fortunate to be better off in terms of unemployment than the rest of the nation. The national unemployment rate remained steady in March at 9.7 percent.

But there are other clues in these numbers. The labor force grew by 2,900 workers last month and is up by 12,700 over March 2009. This could be a sign of increased confidence in the market, as more Iowans decide looking for work is a worthwhile endeavor.

March marks the third consecutive one-month improvement in nonfarm jobs, and the sixth in the last eight months. Iowa has posted an average gain of 5,100 jobs per month for the last 3 months. We are currently down 54,000 jobs from last decade’s high point (1,528,2000 in November 2007). Continuing this trend would be great… and would start to push us closer to that headline I can’t wait to type.

Nothing is objectionable about proposed tax-credit reforms — but much more needs to be done.

Iowa is missing an opportunity to implement strong transparency measures and to recapture revenue that it has been allowing to slip away for years.

Legislation passed by the Senate and now before the House appears to make only small, cosmetic changes to a serious structural problem. Generous tax credits have been leaking revenue out of the state for many years. Considering the recent scandal in the film tax credit program and the fact that Iowa, like most other states, faces revenue shortfalls of historic proportions, the state very much needs meaningful reform.

The Governor’s Tax Credit Review Panel made promising recommendations, and the Governor supported those recommendations when he issued a call for action in his Condition of the State address. Yet, the legislative package falls far short of the panel’s recommendations. For example: 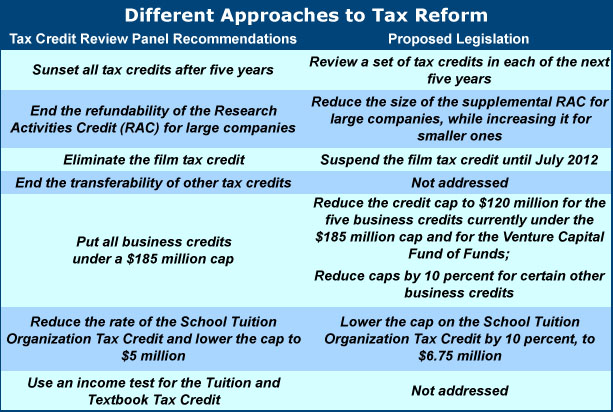 It is important to note that lowering a cap is not the same thing as “saving” money. When the sum of all business credit claims is not reaching that cap, then the state is only reducing its potential liability and not saving any actual dollars.

The proposal is also lacking in essential new transparency measures. No additional disclosures regarding tax credits and expenditures are proposed in the plan. Iowans should know who is getting their tax dollars.

And this bill is certainly not good news for the thousands of Iowans who are seeing important safety net programs and jobs disappear during this recession.

Does this bill do something? Yes. Does it do much? No. Nothing in this bill is objectionable when considering the principles of sound tax policy. That said, much more needs to be done to move Iowa forward and to solve Iowa’s budget problems using an approach that is truly balanced.

Iowa could learn something from Oregon voters about taking a balanced approach to budget challenges.

In a victory for fiscal prudence, Oregon voters recently passed two initiatives — Measures 66 and 67 — that upheld their legislature’s decision to use a balanced approach to their budget shortfall.

In Oregon’s case, lawmakers last session made cuts to the budget and raised income tax for the top 3 percent of filers. They also raised the corporate minimum tax from $10 and increased the corporate income tax rate for businesses netting over $10 million a year, and temporarily for most other businesses. As the Legislature already voted last session to use a balanced approach that included trimming the budget and raising revenue, this vote saves Oregonians from further cuts in important services. This is notable for two reasons:

■     Oregon is known for its opposition to raising taxes, having last voted to raise taxes about 80 years ago when it added a state income tax.
•     It is one of five states that does not have a state sales tax.*
•     It also has a statewide cap on property tax.
•     It has a “kicker” law that automatically sends money back to residents when revenues exceed forecasts. Oregon has no rainy day fund.
■    Given the opportunity for a direct vote, Oregon voters chose to retain a balanced approach and raise taxes on themselves rather than make additional cuts that would decrease funding for education, health care and other essential services.

Oregon’s voters truly understand the importance of a balance during difficult economic times.

So, what does this mean for Iowa? For one, the Oregon vote remarkably reflects the results of a survey of Iowa voters last fall.

That survey for the Iowa Fiscal Partnership found that Iowa voters favor a balanced approach to addressing further budget problems:

■     Six in 10 favor some increase in taxes and fees rather than making cuts alone.
■     By the same ratio, Iowa voters believe the wealthiest Iowans — those earning over $250,000 per year — and big corporations pay less than they should in taxes.

The situation is complicated, and Iowa voters recognize that using budget cuts or tax increases alone will not solve our balance problem.

Oregon’s unemployment rate is 11 percent, compared to Iowa’s 6.6 percent. Oregonians understand that a budget has two sides, and a balanced approach to spending and revenue assures a responsible way to protect critical services in difficult economic times.

* Federation of Tax Administrators website, http://www.taxadmin.org/fta/rate/sales.html (accessed on January 29, 2010). The other states are Alaska, Delaware, Montana and New Hampshire.

We need all the numbers to best view Iowa’s job picture.

Iowa’s latest jobs picture is a bit mixed up. Iowa’s unemployment rate was at 6.6 percent in December, remaining relatively stable through the second half of 2009. But the job numbers themselves dropped dramatically, shedding 13,200 in December alone for the largest one-month drop in more than a decade.

Though this month’s job losses were staggering in their rate of change, the whole year gives a better picture.

Iowa began 2009 with a seasonally adjusted unemployment rate of 4.4 percent, and jumped quickly – to 4.8 percent in the first month, and to 6.2 percent by June and 6.5 percent in July. The rate has stayed at or above that level ever since.

It’s important to understand that the unemployment rate alone doesn’t tell the whole story of those without work.

So what gives? First it helps to know the monthly numbers reflect two surveys that measure different things.

A U.S. Census survey of households determines the unemployment rate. When a person is unemployed he or she must be 1) jobless, 2) looking for a job, and 3) available for work.[1] In other words, not every person without a job is considered unemployed.

People meeting that definition as “unemployed,” along with those who are employed, constitute the labor force. The unemployment rate is the percentage of the labor force that is unemployed.

It’s not perfect: Someone who has lost his/her job and has quit trying to find a job at a given point in time is no longer counted as unemployed, and therefore is not reflected in the unemployment rate. And someone who lost a job with health-care and retirement benefits may now be working independently — at lower pay and without benefits — but is counted as employed. That person is employed, but is really underemployed.

So the unemployment rate does not necessarily measure job quality or the ability of the economy to meet the demand for jobs.

The monthly nonfarm job numbers, on the other hand, come from a payroll survey of employers. It does not count workers; rather, it counts jobs, which is a more transparent way to know what jobs employers are making available.

The nonfarm job number, too, is not perfect. In fact, one person with two jobs is counted twice. And it doesn’t tell whether the jobs are full- or part-time jobs. But it’s a pretty good measure, because it shows changes in the number of jobs the economy is supporting, month to month and year to year.

A few key points from the nonfarm jobs numbers, which show changes by sector for the year:

The economy leaves Iowa with a lot of room for improvement. Employment is often one of the last areas to show signs of recovery, so it is going to take some time to see big positive changes. It is also a reminder that we need all the numbers to best view the state’s employment picture.