Food for thought for Iowa economic recovery policy choices: The vast majority of new businesses in Iowa are independent firms born here. The bulk of job creation comes from independent or standalone businesses.

The Governor’s Economic Recovery Board is scheduled next week (Oct. 6) to discuss and recommendations from working groups and present them to Governor Kim Reynolds. This comes as Iowans have filed nearly a half million initial unemployment claims during the current COVID-19 recession, creating serious gaps in the economy.

This is a good time to remind policy makers how most businesses and jobs are created, and where to focus policy responses. The Board should not look e toward the big fish that get all the publicity when the state lands a new manufacturing plant, or a national corporation announces the opening of a new facility. Instead, they should pay attention to entrepreneurial activity and new businesses.

Year in and year out new businesses are being formed, and innovative small firms grow by leaps and bounds. At the same time, branch plants are shuttered, small businesses fail, high-tech stars are bought up and moved out of state. Taking all these changes into account, what accounts for the bulk of employment growth in Iowa? And what does this tell us about economic development policy? 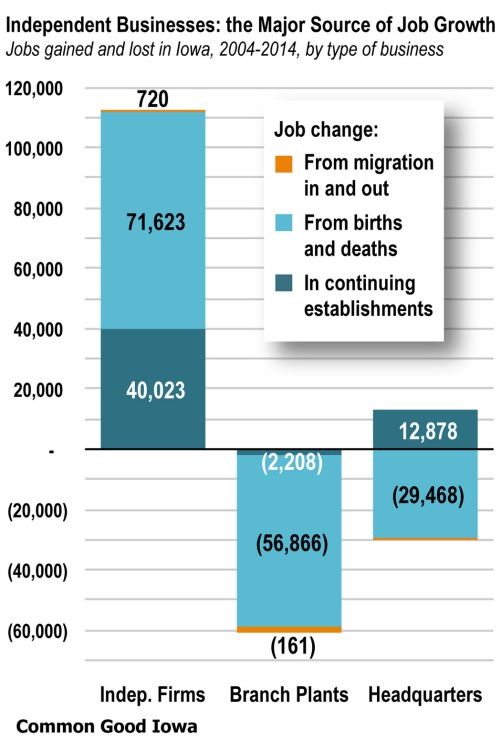 The implications for state and local economic development policy are clear. No matter how you look at it, the birth of new independent businesses is the major source of net job growth. This reality calls for a shift in policy away from incentives to attract branch plants and out-of-state businesses, towards investments in education, research, work supports, entrepreneurial education, and the quality of life factors that have been shown to contribute to entrepreneurial activity.

[1] The five states are Iowa, California, Texas, Massachusetts and North Carolina. For a complete discussion of data sources, research method, and results for the other four states in the study, see Peter Fisher, Business Survival and the Fiscal Effects of State Incentive Policies. Report prepared for the Ewing Marion Kauffman Foundation. The Iowa Policy Project, November 2018. 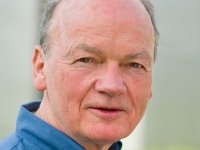 Peter S. Fisher is Research Director of Common Good Iowa, recently formed by the merger of two Iowa-based, nonprofit, nonpartisan public policy organizations, the Iowa Policy Project and the Child and Family Policy Center. Fisher holds a Ph.D. in Economics from the University of Wisconsin-Madison, and he is professor emeritus of Urban and Regional Planning at the University of Iowa. He is the author of a number of reports for the Iowa Policy Project from 2001 through 2020 dealing with state economic development and fiscal policy, including tax incentives and tax increment financing.