Current estimates of job losses in the COVID-19 recession are hard to fathom. Even with a sizable stimulus, the national economy would shed nearly 14 million jobs by mid-summer; Iowa is projected to lose more than 140,000.

To make matters worse, as Josh Bivens of the Economic Policy Institute underscores, this recession is “laser-targeted at low-wage, low-productivity, and low-hours jobs in service industries.”[1]

Our most vulnerable workers, in other words, will bear much of the burden: They do not have the option of working from home — a luxury enjoyed by two-thirds of workers in the top quarter of the earning distribution and by one-third of white workers, but by fewer than 1 in 10 workers in the bottom quarter of the distribution, 1 in 5 African-American workers and 1 in 6 Latinx workers. These vulnerable workers face both a much greater risk of unemployment as the service economy shuts down and a heightened risk of exposure to the virus if they keep working.

This is a scale of unemployment and social and economic dislocation that our existing programs are ill-equipped to handle. This demands a policy response — state and federal — unprecedented in its scale, and innovative in its efforts to reach those most affected. At the forefront of that policy response is both a dramatic expansion and a fundamental rethinking of unemployment insurance.

The first step here has already been taken by the federal government. The Families First Coronavirus Response Act (passed March 18) pumped $1 billion into the administration of state unemployment insurance (UI) programs, in exchange for new state standards and conditions. In order to draw down these funds, states must improve their methods of notifying workers of their eligibility for benefits, provide multiple (not just online) methods of filing, provide prompt notice of the receipt of a claim, waive waiting periods for benefits, waive the requirement that recipients be actively searching for work, and ensure that employers are held blameless for COVID-19 layoffs. (Conventionally, UI is “experience-rated” so that employers with histories of layoffs are taxed at a higher rates).

As Peter Fisher pointed out in recent days, Iowa has met all these conditions. There is still a lot of work to be done — not just to meet the current crisis, but to ensure that our unemployment insurance system is recast for the 21st century and ready for the next crisis.

The first task is to make unemployment insurance accessible and available to more workers.

In Iowa, just 41 percent of unemployed workers ever see a benefit check. This is better than the national rate (28 percent), but it is still a scandal that well over half of the jobless are left in the cold. We should sustain the “Families First” Act’s commitment to raising the recipiency rate by streamlining the claims process. Federal and state unemployment law should revise our definition of “employee” to better capture the diversity of employment (including the self-employed, gig workers, and the like) in the modern economy. Too often, workers — cleaners, homecare workers, delivery drivers — are misclassified as “independent contractors” and shut out of basic social insurance programs like UI. The Pandemic Unemployment Assistance Program embedded in the latest COVID-19 stimulus bill provides up to 39 weeks of benefits to those (like the self-employed) otherwise ineligible for UI. This is a start — but the real fix would be to recast the law so that such workers are eligible in good times and bad.

By the same token, we should make permanent the more generous standard for a “good cause” separation, allowing workers — not just in pandemic conditions — to qualify for UI when they leave their jobs for compelling personal reasons. Iowa should make better use of its work sharing program, which allows workers partial compensation for reduced hours, while retaining their attachment to the labor force and their access to job-based benefits such as pensions and health insurance. And we should make benefits available to new entrants to the labor force — students graduating into a recession, returning caregivers, the formerly incarcerated — who deserve support even in the absence of a recent work history.

Second, we need to bolster the size and the duration of the basic benefit. Iowa’s current “replacement rate” is less than 50 percent of current wages — higher than the national average (38 percent) but still woefully insufficient to maintain basic expenses.[2] The logic here, of course, is that a low replacement rate will compel the unemployed to look for work. But low replacement rates (and short benefit windows) create enormous economic burdens and, by pressing workers back into the labor force, actually worsen re-employment prospects. As a baseline, UI benefits should be closer to two-thirds wages. And, for the duration of this crisis, they should be 100 percent. After all, places of employment are under order to close down, and those displaced have few options. This is why the pending stimulus bill bumps UI benefits by $600/week through the end of June. 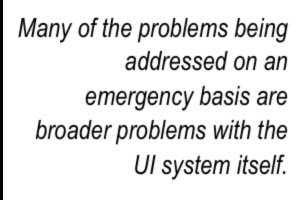 Finally, we need to improve the funding of state unemployment insurance programs. The $1 billion boost to administration in the “Families First” legislation does not come close to backfilling cuts in federal aid since the 1980s. During the last recession, 36 state UI trust funds went broke — and most of those entered the current crisis with insufficient reserves. Iowa’s trust fund is in better shape than most, but all state funds will be exhausted once this crisis lifts. Under current law, the state only taxes the first $7,000 in earnings. This should be increased dramatically (Social Security taxes the first $137,700), so that revenues are sufficient to sustain UI administration, and pay extended and disaster benefits when needed.

Federal emergency legislation — some in place, some in the pipeline — will install many of these reforms on a temporary basis. But many of the problems being addressed — the accessibility of benefits for deserving workers, the low percentage of the unemployed who receive benefits, the insufficient level and duration of benefits — are broader problems with the UI system itself. Iowa should, of course, do what it can to qualify its workers for extended and enhanced benefits paid for with federal dollars. But it should also follow the lead of other states in making its UI system more secure and equitable on a permanent basis.

[2] The inadequacy of this replacement level is compounded by the fact that the benefits are still taxable, and yet they do not count as earnings for purposes of the Earned Income Tax Credit, creating an additional income loss for low wage workers receiving that tax credit.

Colin Gordon is a University of Iowa professor of history and is senior research consultant for the nonpartisan Iowa Policy Project. He has authored several IPP reports since the organization began in 2001. Among these are the State of Working Iowa series, and the October 2019 report “Race in the Heartland: Equity, Opportunity and Public Policy in the Midwest,” for Economic Analysis and Research Network members IPP, Policy Matters Ohio and COWS.