Editor’s Note: This post updates a previous post by David Osterberg, “New blows to public accountability,” about features of a proposal to weaken regulation of Iowa electric utilities.

A version of this piece appeared as a guest opinion in The Gazette, Cedar Rapids 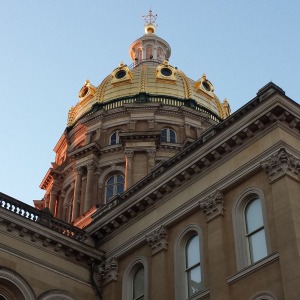 A bill scheduled for debate the week of February 26th in the Iowa Senate would remove the public’s principal check on monopoly power of the state’s regulated electric utilities.

Utilities are permitted monopoly status for economic efficiency. It would be difficult, and expensive, to set up two or more competing electric or gas utilities to serve one community, with separate lines connecting homes and businesses. In exchange for a monopoly presence in a given area, privately owned utilities are subject to community scrutiny and state regulation of their rates and services.

Senate File 2311 would remove a significant share of oversight from electric utilities. Presently the Iowa Utilities Board (IUB) oversees MidAmerican Energy and Alliant Energy. This protects customers, who have no choice as to which company brings them electricity.

It is ironic that legislators would threaten a structure that works and promotes economic development. Iowa has some of the lowest energy rates in the nation (third- or fourth- lowest depending on the year). At the same time, this state has been developing one of the strongest clean energy economies. These features make Iowa a big draw for certain industries — a far more attractive reason to locate here than the tax breaks offered by so many states.

Under the proposed bill, many policies that have led to Iowa’s cost-effective clean energy leadership would disappear, especially energy efficiency programs mandated almost 30 years ago by the Iowa Legislature, which require utilities to file energy efficiency plans every five years.

Without regulation, monopolies could profit by producing more power, rather than helping customers save energy. They could unfairly treat customer-generated solar and wind energy and discriminate in favor of their own energy generation.

Left to their own preferences, monopolies might charge the smallest users more. Alliant proved this in its last rate increase filing. The Alliant plan would have increased the cost of residential electricity by about 10 percent while increasing the mandatory fixed charge just to hook up by 30 percent. The plan was designed to put more costs on those who use less, including those with low-income, essentially penalizing customers who have used the utility rebates to buy efficient appliances or those who generate solar energy.

But because Alliant needed permission from the IUB to raise rates, this rate scheme was reviewed and ultimately not allowed. Instead, the energy charge and the mandatory fixed charge were allowed to increase by roughly the same percentage.

SF2311 would reduce this longstanding oversight on all utilities, shifting costs and risks to their customers. Alliant could discriminate against solar customers by putting them in a separate rate category so they could be assessed a higher fixed charge. This could shut down solar firms and cost many of the state’s 700 solar jobs. The changes threatening the energy efficiency industry endangers even more jobs — more than 20,000.

The forces behind this bill lessen public oversight and public accountability. They would change Iowa law in ways never promoted publicly in the last legislative campaigns.

David Osterberg, a former state representative (1983-95), is professor emeritus of occupational and environmental health at the University of Iowa, and co-founder of the non-partisan Iowa Policy Project.