In a republic we have rules — laws — framed by a Constitution that sets limits on how far they go, and on who can exercise them, while assuring that we can change them as needed, in an orderly process that protects the rights of all.

Imagine these rules were gone, that they all changed, that a minority could routinely stop the majority from moving forward, that individual liberties could vanish.

Imagine the squabbling members of Congress you see every night on television setting themselves up as modern-day George Washingtons, James Madisons and Ben Franklins, and flipping everything on its head. A bill calling for a U.S. Constitutional Convention — approved last year by the Iowa Senate State Government Committee and moving again this year — could do just that.

The bill, Senate Joint Resolution 8, or SJR8, would put the State of Iowa on record calling for a constitutional convention, which could easily become a free-wheeling assault on our constitution, following whatever process it chooses, with no review by any existing court or legislative body.

While the resolution asserts that such a convention would be limited, the scope of issues is so broad as to effectively erase limitations: “to impose fiscal restraints, and limit the power and jurisdiction of the federal government.” Even then, it is not clear that states have the authority to limit the scope of a convention at all. According to constitutional scholars, the delegates would likely be free to define any limits as broadly as they wish, or to ignore them. 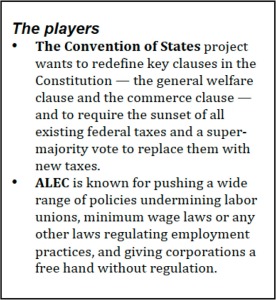 Why now? In some states, such as Iowa, far-right organizations including the Convention of States project and the American Legislative Exchange Council (ALEC) now have enough supporters in key positions to push for such changes even though none of this has been the focus — perhaps not raised at all — in Iowa election campaigns.

Supreme Court Justices ranging from the liberal Earl Warren to the conservative Antonin Scalia have warned against the dangers of opening up the constitution to radical change. If 34 states pass such a resolution, Congress will call a constitutional convention. One group counts 28 states that have already signed on.[1] It is conceivable that the threshold could be reached.

The Constitution contains very little guidance on the procedures for, or scope of, such a convention. The only precedent we have to go on is the constitutional convention of 1787, at which the existing document, the Articles of Confederation, was scrapped and an entirely new constitution, our present one, was created. That convention even changed the rules for ratification.

The delegates to a constitutional convention could set a rule that all decisions would require approval only by a simple majority of the states, with each state given one vote. That would allow the 26 least populous states, which contain less than 18 percent of the U.S. population, to rewrite the constitution.

The Constitution provides no guidance as to whether such a procedure is permissible. And even if Congress were to establish rules for the convention, there is no mechanism to force the convention to follow those rules.

Constitutional scholars say that under a convention now, the entire U.S. Constitution is up for grabs. It could quickly become a contentious and chaotic free-for-all, with moneyed interests free to lobby and purchase support however they chose.

[1] Iowa is shown as already on the approval list because of a resolution passed in 1979, but groups are pushing for a new one for fear that the age of that resolution will disqualify it, and because the wording of the 1979 version is different from the current one.