Living in Iowa, we know snow when we see it, and what’s coming from Washington is a snow job of devastating proportions.

Recognize the House Republican tax bill for what it is: a plan to add at least $1.5 trillion in federal deficits to make the rich richer, and hurt Iowa’s working and middle-income families.

How will we pay for those deficits? Some lawmakers have already made it clear they want to gut economic and health security of families who are already vulnerable.

On the block: Medicaid, food assistance and education from Head Start through college, just to name a few likely targets given recent attempts in Washington.

Inevitably, these kinds of service cuts ultimately will put pressure on our state government to respond, at a time when the state is already hard-pressed to meet current obligations.

Is that what Iowa lawmakers signed up for? If so, they neglected to campaign on it — on how they will choose who gets health care, which school districts will decimate their own staffs, and where parents might find preschool for their kids. There has been precious little to show us how they will assure educational opportunity for students in economically vulnerable families, or workers at mid-career who suddenly find themselves out of work.

Yet, all we’re hearing from the authors of the tax plan in Washington is that it helps middle-income families — all evidence to the contrary notwithstanding. And, largely, silence from the folks who will be the final arbiters in Des Moines when the time comes to make state-level choices.

It’s not like this snow job from the East was not in the forecast. Many have seen it coming. The nonpartisan Tax Policy Center estimated in September that $75,000 income households with kids would see only a $20 average tax cut in 2027 from the GOP tax framework at the time — compared to a $200,000 cut for millionaire households with children.

In addition, the nonpartisan Institute on Taxation and Economic Policy found over half of the benefits of that earlier plan in Iowa going to the top 1 percent, with less than 15 percent going to the bottom three-fifths of Iowans. 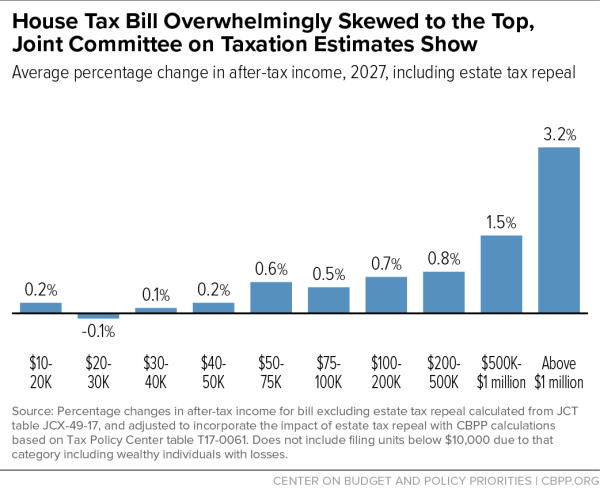 More details will become apparent in the coming days with further responsible analysis that we can hope will find its way into the public debate.

Those peddling the tax-cut spin are counting on people to tire of the debate and let these cuts happen. The stakes are no less critical today than they were the first time they were identified.

Bad policy is bad policy. Bad economics is bad economics. And the poor services that result, alas, are what they are.