Now is the time to be speaking frankly about the longer-term impacts of health care policy — and that might make a special session useful, sooner rather than later.

Long-term impacts could be decided in short order;

Might not our state lawmakers want to weigh in? 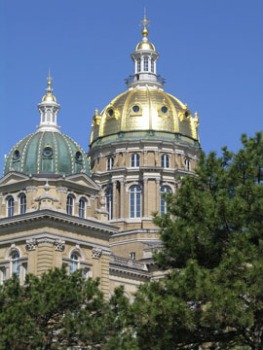 If anything has been clear about the current health-care debate in Washington, it is that little is clear — except the likelihood that (1) people will lose insurance coverage and thus access to health care, and (2) this will pose new challenges for state government.

That being the case, it seems a good time for the Legislature to return to Des Moines and sort it out, sooner rather than later. It will be easier for legislators to talk to their federal counterparts about all this before legislation passes than afterward.

Because of the Affordable Care Act (Obamacare), the Medicaid expansion serves about 150,000 Iowans, and would serve an estimated 177,000 Iowans in 2019 if preserved. But those Iowans — and some 55,000 more — would be in jeopardy of losing insurance under legislation pending in the Senate. If the enhanced federal share of funding for Medicaid expansion is reduced or eliminated under any legislation to come — and both the House and Senate bills currently would do this — states would have a choice: Fill in the gap or let people go uninsured.

Oh, and if you’re going to choose to fill in the gap, go ahead and plan now on what will have to be cut to compensate for it. K-12 education, perhaps? Even more cuts to the regents institutions? Child care? Water protection? Law enforcement and corrections?

Already, legislators and Governor Kim Reynolds are facing those kinds of questions amid a looming fiscal shortfall and speculation about a possible special session.

In The Des Moines Register this week, columnist Kathie Obradovich suggested Governor Reynolds “is prudent to wait until fall to make a decision on a special session but that doesn’t mean she should avoid talking about it. Now is the time to be speaking frankly with Iowans and individual legislators, identifying the causes and consulting on potential solutions.”

Now is also the time to be speaking frankly about the longer-term impacts of health care policy — and for that reason, waiting until fall might be too late. Legislative leaders and the Governor right now could be bringing in experts for a special session to discuss the potential impacts, and reach out to the congressional delegation, before decisions are made that restrict state budget choices for many years to come.
Unless, of course, they want to see budget crunches and special sessions more frequently.

One thought on “Why not a special session?”