“At 93 I am nearing the end of my life on this planet. As a parting message, I want to encourage you in the strongest terms to use your influence to make distributed solar energy a major source of electricity. … Please use your influence.” — Don Laughlin, in his letter to Warren Buffett

I visited an old friend, Don Laughlin, in a nursing home before he died. A stroke had paralyzed half of his body but certainly had not affected his mind. Even with his impending death he was looking toward the future as he spoke with Nathan Shepherd of IPP and me.

Our conversation was about renewable energy, which he had promoted for decades. He told us that one of his many unfinished projects was a letter to Warren Buffett, the owner of MidAmerican Energy, to ask him to be more supportive of rooftop solar power. Nathan suggested to Don that he dictate a letter and that we would send it to the billionaire. And we did. 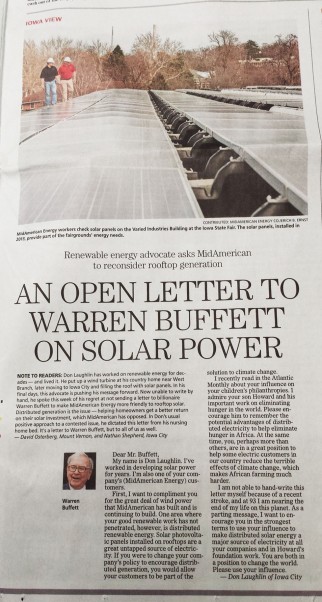 But we realized that with probably hundreds of letters every day, Warren Buffett might never hear of Don’s letter. We spoke with the Des Moines Register’s opinion editor, who loved the idea of publishing Don’s letter as an open letter to Buffett. So, two days after we spoke to Don, a third of the Register’s op-ed page was Don’s letter, an introduction by Nathan and me, and a huge picture of solar panels. (Click on image.)

Within several days, Don Laughlin would be gone at the age of 93.

At a celebration of Don’s life at Scattergood School near West Branch August 27, my neighbor Deborah Dakin suggested that while she was sure Don was happy to do one last act to encourage solar power and reduce the effect of climate change, more could be done. 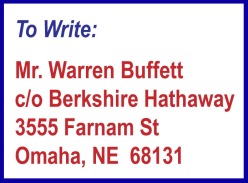 She suggested that everyone who reads this write to Warren Buffett to ask him to pull his company back from efforts to reduce the return to homeowners from their own rooftop solar. That is because MidAmerican is trying to kill net metering, the ability of a homeowner or business to receive retail rates for any excess electricity they generate beyond their own usage.

Your letter would honor Don Laughlin’s last public activity, and, if it succeeds, each of us will be doing our part to stave off the worse and worst effects of climate change.