The weak House attempt to satisfy Davenport on school funding inequities is a sign that a squeaky wheel is being heard. But the whole statewide axle is rusty.

Davenport has been the squeaky wheel on school funding inequity in Iowa, and the Iowa House this week tried to apply a drop of oil. Problem is, the whole axle is rusty, and cracked. 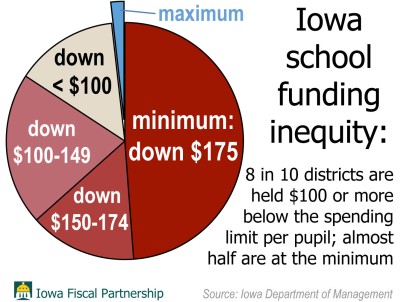 On Tuesday, the House passed an amendment, H8291, that dealt only with the squeakiest wheel — Davenport — and only for a one-year fix.

Davenport is not buying. In a Quad-City Times story, Davenport lawmakers were not happy. Their school superintendent, Art Tate, called it “no help at all,” and for good measure, put the focus where it needs to be.

Wrote Tate in an email to the Times: “It does not address the moral imperative to make every student worth the same in Iowa.”

The larger question, given that moral imperative, is why more districts aren’t more active on this issue. One reason could be that Iowa’s inequities, while real, do not rise to the level of what might be found in other states.

Another reason might be that just fighting for basic school funding is hard enough, when the Legislature is setting a seven-year pace of funding growth below 2 percent despite faster growth in district costs, strong state revenues and approval of more business tax breaks.

We’re in the closing days, perhaps the closing hours, of the 2016 legislative session, with exceedingly few successes for education and working families. It’s too late in this session to expect real reform of the school funding system, pleas for which have come for many years — and focus on more than the per-pupil cost. There are other equity problems, the largest of which is in funding transportation services.

The weak House attempt at a one-year fix for Davenport, however, is a sign that the squeaky wheel is being heard. Think of what might happen if more wheels squeaked.