The 20 states that performed best on the four measures of income actually score much worse on ALEC’s ranking than the 20 states with the lowest income.

ALEC — the American Legislative Exchange Council — persists in peddling “research” that knocks down its own policy ideas.

In its latest edition of Rich States, Poor States, just released, ALEC’s Economic Outlook Ranking scores states on 15 measures reflecting ALEC’s preferred policies towards business. Our Grading the States analysis has exposed the flawed methodology of ALEC’s report, but the authors have not changed it for the 9th edition.

ALEC’s dilemma: The index purports to predict which state economies will perform the best, but in fact there is no relation between a state’s score and how well the economy grows subsequently.

Since the first edition in 2007, it remains the case that ALEC’s “best” states — the ones with the highest rankings — are actually poorer on several measures than the supposedly “worst” states. The graph below has been updated to reflect the 9th edition rankings and the latest income data. 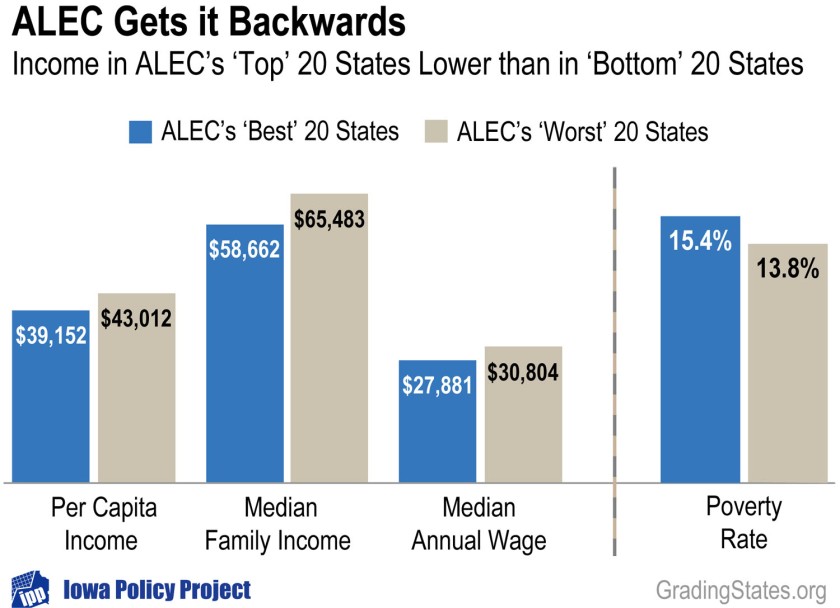 In its fervent anti-government bias, the report offers a package of policies — for fiscal austerity, suppressing wages and imposing proportionately higher taxes on low-income people — with a promise of economic growth, when it really is a recipe for economic inequality, declining incomes for most citizens, and starving public infrastructure and education systems of needed revenue.