Not only are the actual job increases about half of what the Governor had hoped — but even his own “gross” counting method leaves him short, at 184,000.

For years, we had to watch Governor Branstad’s bogus job count tracked on the official nonfarm jobs spreadsheets provided by Iowa Workforce Development. 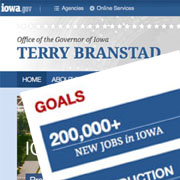 You might remember: The Governor set a goal for 200,000 new jobs in five years. We didn’t come close — 104,500 net new jobs from January 2011 through January 2016. Everyone wants new jobs, but it was clear for a long time the goal was unrealistic.

And it was a distraction for those of us who work with such data carefully, as we do each month in our Iowa JobWatch report.
Nevertheless, the Governor’s people concocted a way to count jobs that no elementary arithmetic teacher would sanction — leave out the job losses. So IWD added a line to the official sheet, for “Gross Over-the-month Employment Gains.” And that way, the Governor claimed, he made it with a couple of months to spare.

In fact, at IWD’s budget hearing in November, the Governor asked IWD Director Beth Townsend to back up her slideshow to bolster the claim with the media present.

A few months later, it looks like we should back up that slideshow once again. The jobs data have now gone through their regular annual review, and the numbers show something different.

Not only are the actual job increases about half of what the Governor had hoped — but even his own “gross” counting method leaves him short, at 184,000.

Yes, we all want more jobs in Iowa, better jobs, more sustained job growth. But we also want the facts treated properly. Is it too much to ask for the Governor or IWD to acknowledge publicly that the “mission accomplished” claims were wrong?

When we see the news release, we’ll be sure to pass it along.