In perspective, “tax coupling“ must be seen as a budget choice, stacked up against other ways to use nearly $100 million. 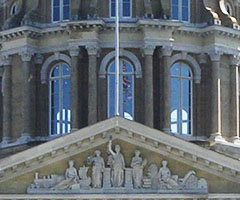 There’s a reason we can’t have the things we need. We keep giving money away, often without a good understanding of why we’re doing it.

A good example is the so-called “coupling” legislation now moving through the Iowa Legislature. It would do some sensible things, but others — not so much, and not for the reasons being promoted. Read more about it in this Iowa Fiscal Partnership policy brief.

Most of the cost of the coupling bill is for a business tax break. The Farm Bureau recently quoted one of its local leaders, Washington County Farm Bureau vice president Tye Rinner, that this provision is “really important to us right now.”

“We’re all in limbo right now waiting to see what’s going to happen and that’s keeping us from making the investments in equipment, buildings and other capital purchases, which would also create jobs in our rural communities,” Rinner was quoted.

Unfortunately, that message has little to do with the legislation under consideration. What is missed is that the bill at the Statehouse would make changes for only one tax year — and it’s one already past. The changes are retroactive to tax year 2015.

So if farmers or other business people wanted to make a capital investment that would benefit from the kind of tax provisions being proposed, they would not get the break. They’d be too late.

On the other hand, the bill would reward decisions already made. It’s not an incentive to do something they would not have done anyway — and it’s very costly. It’s about $98 million that was not in the budget for the current year, and would hit the ending balance.

In perspective, this must be seen as a budget choice, put up against other ways to use that $98 million, which would go against the resources on hand for the new fiscal year. You might have noted the difference between the House and Senate on a school aid number is 2 percent in supplemental state aid, whether to set per-pupil cost growth at 2 percent or 4 percent. The difference is about $85 million, according to the Iowa Association of School Boards.

So as you can see, we can subsidize business people to do something they already did without a subsidy, or for less money we can have a 4 percent increase in school aid. The House speaker says we can afford the first choice, but not the second. Both positions cannot be so.