Why not get rid of the political goal and focus on a realistic economic goal: the job growth we would need to bring down unemployment and keep pace with the growth of the labor market. As of the latest count, we are 55,100 short.

This week we were treated (?) to the latest bizarre count provided by Governor Branstad’s administration on how many jobs he has created.

The Governor is claiming 160,600 jobs already created since he took office, and it’s nowhere close to reality, if for no reason other than the fact that he’s only wanted to count job gains and ignore the losses.* But even then, the number is inflated.

So, class, let’s all take out our abacus and our slide rule and try to come up with the same number. On second thought, let’s not. Let’s get past the politics on job numbers and just count ’em ourselves. A pencil will do.

As you’ll recall, the Governor promoted a goal of creating 200,000 jobs in five years. He took office in January 2011. 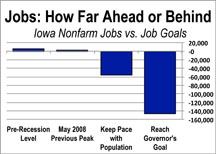 IPP’s latest JobWatch report shows we have not kept that kind of pace in Iowa over the last decade. In 2013 the average net gain has been 2,400 a month, which is higher than usual.

Why not get rid of the political goal and focus on a realistic economic goal: the job growth we would need to bring down unemployment and keep pace with the growth of the labor market. As of June, we are still 55,100 jobs short of this basic threshold. But that’s a more manageable number than the 145,600 left to meet the Governor’s goal, and probably a more meaningful one.

Governors and state legislators have only so much impact on the overall health of a state economy to influence its job performance; there are much greater forces at work.

In the end, the issue for Iowa families is not as much a Governor’s goal as it is whether the economy is producing the number — and quality — of jobs necessary to maintain and improve all Iowans’ standard of living.

But we didn’t raise the issue about the job count. Others have. So as long as Iowans are going to be looking at it, we’ll help them to monitor it accurately.

* The Governor’s count of jobs already produced, 160,600, is far above even the number you’d accurately compute if you avoided counting job losses. Iowa Workforce Development has added a line on its nonfarm jobs spreadsheet leaving out the job losses and counting only gross jobs added, month by month, since January 2011. For what it’s worth, that number is 112,700 — about 48,000 behind what the Governor’s office was claiming Wednesday, and more than twice the actual net increase of 54,400.

2 thoughts on “The problem with political goals on jobs”